Seville commemorates the death of one of the most important Spanish King in the Middle Ages.

Last May 30 was a festival marked for Seville, the day of Saint Ferdinand, Patron Saint of the city. He was one of the most iconic leaders in the Middle Ages in Spain.

This king proved to be an extraordinary commander with a great capacity of resistance, perseverance with a resilient nature. His life and victories moved Spain into another direction and the rugged dominance of Castille and the Castilian language expanded throughout  Spain. 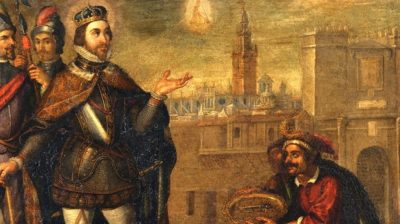 The conquest of Seville from the Moors proved to be final nail in the coffin for the Muslims in Andalusia. It ended up  being the most ardous struggle of the whole Reconquest. Seville resisted but finally it fell . It was not an easy battle, on the contrary daunting and challenging and it took the Christian troops sixteen month of siege.  After this crucial battle, Ferdinand put an end to more than five centuries of Muslim rule in the city.

He decided to reside in the Muslim Palace of the Alcázar, outstanding fortification, he truly admired. The 30th of May in 1252, ¨in abasing humility, he received the final sacrament and kneeled upon the bare earth with a rope about his neck ¨, he wanted to be presented as a repentant sinner. 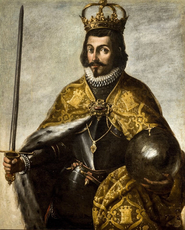 His death marks a turning point in the history of Spain and the city of Seville  and a day to celebrate in the festive carlendar of the city.  Locals and tourists approach to contemplate the uncorrupted body of the monarch. The 30 of May the royal sepulchre is publicly opened and displayed. He lies in an enriched silver casket, decorated with the coat of arms of Castille and Leon and a curious epitaph in four languages : Latin, Hebrew, Arabic and Spanish. He still dressed  in  ancient royal robes, the crown and hold an scepter of his authority. He was canonized in 1671.

Ferdinand was the son of Alfonso  IX of Leon and Doña Berenguela , daughter of Alfonso VIII of Castille, so he became the legitime heir of both kingdoms of Spain Castile and Leon, for the first time reunited. He married Beatrice de Swabia,  a German princess and daughter of the Holy Roman Emperor . They had ten children, one of whom Alfonso the X succeeded his father on the throne of Castille an Leon. His second wife, Joan of Ponthieu bore him a daughter Eleonor, who married  Edward I of England in 1254. 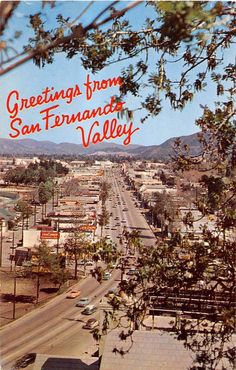 Saint Ferdinand and his epic achivement  was not only celebrated in this country but travelled overseas . After the Spanish discovered the valley in California in 1769, and in 1779 they founded  San Fernando Mission to honor the King Ferdinand III, the king saint. Today this Mission is situated in Mission Hills, the 17th of the 21 missions  built by Spanish friars near the California coast.

sevillavisita.com uses cookies to enhance your experience. We assume you agree if you continue to browse this site. ACCEPT
Política de privacidad y cookies

Any cookies that may not be particularly necessary for the website to function and is used specifically to collect user personal data via analytics, ads, other embedded contents are termed as non-necessary cookies. It is mandatory to procure user consent prior to running these cookies on your website.